Millions of Italians are casting ballots in an election that could see the far-right coalition led by Giorgia Meloni win power.

Rome, Italy – Polls across Italy have opened in the early hours with millions of Italians set to cast their ballot in a national election that could bring the country’s most right-wing government to power since World War II.

More than 50 million Italians eligible to vote on Sunday – including 4.7 million who live abroad – will elect new representatives of a slimmed-down parliament: 200 members for the Senate and 400 for the Chamber of Deputies.

Polls opened at 7am and will close at 11pm local time (05:00 – 21:00 GMT). Exit polls are expected later in the day, but official results will not be announced until Monday.

The electoral campaign kicked off during the summer after political infighting led to the collapse of outgoing Prime Minister Mario Draghi’s government in July.

Al Jazeera’s @vpietromarchi explains why Meloni, who could also become the country’s first female PM is so popular ⤵️ pic.twitter.com/BYgHWX3pWg

Giorgia Meloni, leader of the far-right party Fratelli d’Italia (Brothers of Italy), has been dominating the campaign, polling at 25 percent, according to the last survey published before a pre-election ban on September 10.

This would put Meloni on track to becoming Italy’s first-ever female prime minister at the head of a right-wing coalition that includes anti-immigration populist Matteo Salvini and octogenarian media tycoon Silvio Berlusconi.

The rival Democratic Party led by Enrico Letta, polling at 22 percent, has failed to forge a broad alliance with other centre and left-leaning parties, reducing its chances to win the election.

The Five Star Movement of Giuseppe Conte, which observers considered a moribund party, was polling at 13 percent after a strong campaign in the country’s south. 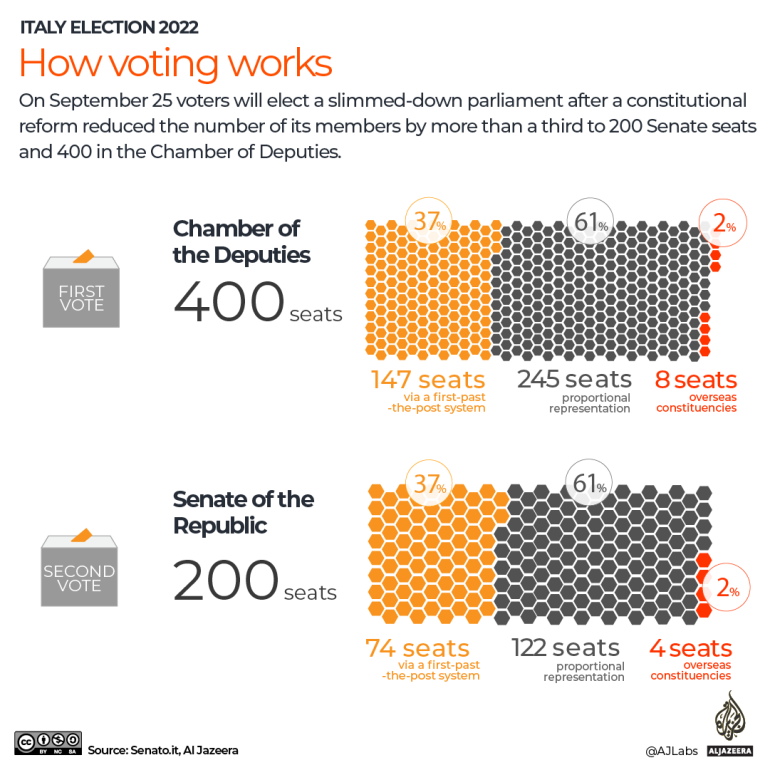 The Italian election is taking place amid a biting energy crisis, widespread disillusionment about politicians’ views and questions about the country’s future stance towards the European Union.

While Meloni’s coalition has maintained a united front on certain flagship policies, including opposition to what it calls “illegal immigrants” and the reduction of taxes, cracks have appeared among its leaders on fiscal and foreign affairs policies.

On the fiscal front, Meloni has stuck to Draghi’s line – refusing to increase Italy’s record-high debt while insisting on capping the price of gas and decoupling it from energy costs. Salvini is of a different view, pushing for 30 billion euros ($29bn) of more debt to help struggling businesses and families.

The coalition also appears divided over Italy’s approach to Russia.

Meloni has staunchly supported sanctions against Moscow, while Salvini insisted they should be reconsidered. Berlusconi, a longtime friend to President Vladimir Putin, came under fire on Thursday night after suggesting the Russian leader only wanted to replace Ukrainian President Volodymyr Zelenskyy with a government “made up of decent people”.

Another point of contention is Meloni’s position on the EU.

Meloni, who co-founded Brothers of Italy in 2012 out of the ashes of a post-fascist party, had for years delivered high-decibel speeches against the EU and international financial markets, which she portrayed as enemies of Italy’s national interests.

But as the prospect of becoming prime minister nears, at a time when Italy is receiving much-needed EU funds to shore up its underperforming economy, the 45-year-old has softened her tone. She has repeatedly pledged her commitment to the bloc and her support for Ukraine, including by keeping the sanctions imposed on Russia after it invaded its neighbour in February.

Although results are expected on Monday, it will take weeks before a new government is installed in Italy. Once results are confirmed, the new legislators will vote for the presidents of the two chambers, who along with party leaders will start consultations with President Sergio Mattarella.

The head of state will then put in charge a prime minister to present a list of ministers who will have to be confirmed by the president and then approved by parliament via a confidence vote.

Analysts say this means Italians will only likely see a new government by mid-November.