In his speech at the United Nations General Assembly, the US president said ‘much of Pakistan is under water … and needs help’.

Islamabad, Pakistan – Pakistan’s prime minister has thanked US President Joe Biden for his appeal to the international community to help the flood-ravaged South Asian nation.

In his speech at the United Nations General Assembly on Wednesday, Biden said “much of Pakistan is under water … and needs help”.

“We don’t have much time left. We all know we are already living in a climate crisis,” the US leader said as he announced a $2.9bn fund for humanitarian and food security in the world for this year.

“Families are facing impossible choices, choosing which child to feed, and wondering whether they will survive. This is the human cost of climate change. And it’s growing, not lessening,” Biden said.

Pakistan is facing one of its worst humanitarian crises after record rains and melting glaciers caused catastrophic floods there, affecting 33 million of its 220 million population.

The deluge has killed nearly 1,600 people so far, including more than 300 who died of water-borne diseases caused by stagnant water. The UN has warned of a health disaster looming in the worst-affected areas. 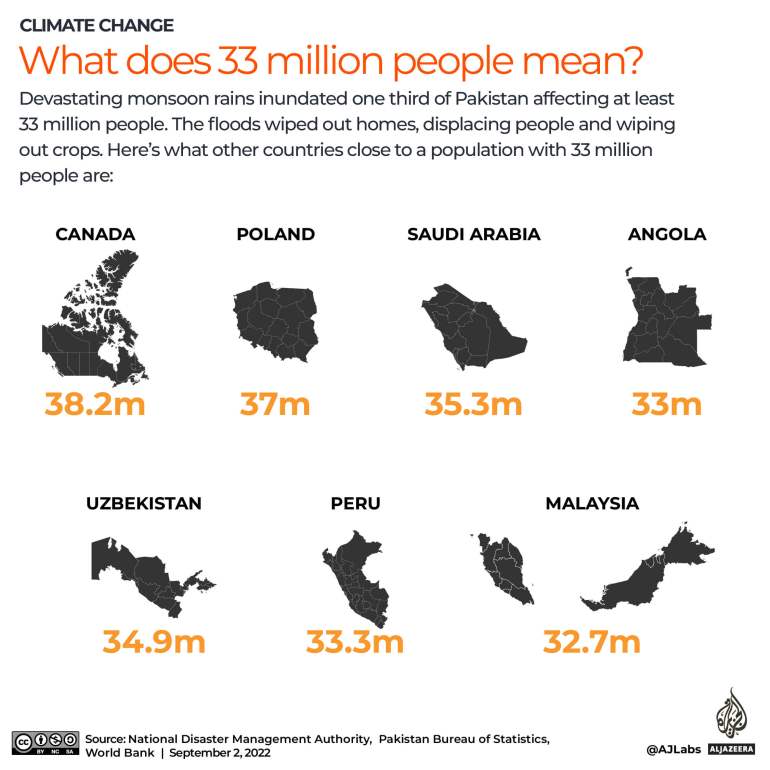 Biden’s remarks at the UNGA came shortly after Pakistan’s Prime Minister Shehbaz Sharif urged the world to help the country in fighting the disaster.

“Thank you President Joe Biden for highlighting the plight of the flood victims in Pakistan and urging the world for an immediate response, as my country is facing the ravages of unprecedented floods,” Sharif posted on Twitter on Thursday.

“The calls of stranded women and children for help need to be heeded.”

Officials in Pakistan, which is already straining under a financial crisis, estimate the total loss caused by the floods at $30bn.

Sharif, who is in New York for the UNGA summit, on Wednesday met several world leaders on the sidelines to discuss the aftermath of the floods. He is expected to address the UNGA session on Friday.

In his opening remarks at the UNGA on Tuesday, UN Secretary-General Antonio Guterres, who visited Pakistan earlier this month, urged the global leaders to consider “debt reduction mechanisms” to help Pakistan.

“These (mechanisms) could have saved lives and livelihoods in Pakistan, which is drowning not only in floodwater but also in debt,” he said.

Pakistan has to pay $1bn in international bonds by December. Its finance minister earlier this week said the payment would “absolutely” be met.

In a news briefing in Islamabad on Wednesday, Julien Harneis, UN resident and humanitarian coordinator for Pakistan, said a “second disaster is looming in sight” in Pakistan, with health, nutrition and water being critical concerns.

“A lot is being done but much more is needed. This is bigger than us, the needs are colossal,” he said, adding that the UN is working with the Pakistani government to revise its initial appeal of $160m to help the country.

“Even though the pledges have crossed $160m, we now realise that the original appeal was not sufficient. We are working with the government to revise the appeal in the coming weeks considering the changing and growing needs,” he said.

“I have never seen anything like this,” the 47-year-old actress said during a meeting at Pakistan’s National Flood Response and Coordination Centre on Wednesday. “This is a real wake-up call to the world. Climate change is not only real, but also very much here.”

DataGuard locks down $61M for data protection as a service • TechCrunch