Two years before Youcef Oudjidane co-founded Sudanese fintech Bloom after failing to find startups tackling currency depreciation in Africa to invest in, he was the managing partner and head of EMEA (Europe, Middle East and Africa) at Class 5 Global, a San Francisco-based venture fund with a keen interest in emerging markets.

But Class 5 wasn’t his first shot at venture capital investing. At Solebury Capital, a boutique investment bank later acquired by PNC Financial Services, the U.K.-born entrepreneur, who is Algerian by descent, was a senior associate. And in 2017, he joined as head of strategy and investments at the Dubai Future Foundation, a small team that launched the first venture capital fund in the Dubai government.

As an angel investor and venture capitalist, Oudjidane has written checks in African startups such as Telda, Dash, Moove and Chari. And in an interview with TechCrunch, the investor said he also worked on several tech IPOs including Snapchat and invested on behalf of several professional football (soccer) players like Mesut Ozil, Blaise Matuidi, Dele Alli, Ilkay Gundogan, Ross Barkley and Jack Wilshere.

His relationship with soccer players — Oudjidane played the sport at the college level and won scholarships — and other athletes have proven valuable for his next adventure: Byld Ventures, a $15 million fund launched this May and focused on early-stage startups in Africa. Over a dozen athletes make the majority of the fund’s backers, including the Dubai government and several unnamed institutional LPs.

“Over the last 12 months, founders in Africa were reaching out to me for advice and I was investing personally,” said the founding partner in an interview. “So, I decided to institutionalize it and put a fund together.”

Oudjidane believes Africa is at the intersection of opportunity, that is, the next billion people to come online — and judging by its current portfolio of pre-seed stage startups, fintech is what intrigues his fund.

“We invest early, sometimes pre-pitch deck; we make the joke that ideally, once you’ve handed in your resignation,” said the founding partner. “We strive to be at the foundation head of company formation; we want to be there on day one. Fintech is our bread and butter. It’s just what we know and what we love.” 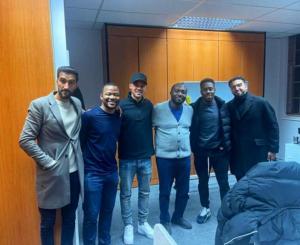 Byld Ventures’s portfolio also suggests that the fund prefers to back startups building APIs and infrastructural plays in the fintech segment. RaliCap, an emerging market fund, runs an identical portfolio setup. Investing in startups building financial infrastructure is one of Byld Ventures’ principal themes, in addition to those reversing Africa’s brain drain and repeat founders. For the latter, three of the firm’s investments have gone into founders that have had successful exits: Skehinah Adewumi’s Touchtech Payments, Idris Saliu’s VANSO and Segun Adeyemi’s Amplify were acquired by Stripe, Interswitch and Carbon respectively.

“I doubt many investors have our knowledge of fintech in Africa, answered the founding partner on why fintech founders would choose Byld Ventures when going out to raise pre-seed checks. “We build deep and personal bonds with founders, perhaps a by-product of us being open and vulnerable. For example, some founders are reluctant to seek counsel from investors when the proverbial shit hits the fan; chances are, we have gone through worse. We believe in the power of intellectual honesty and independent thinking to help reach the optimal decisions.”

And in terms of what the firm looks for in founders, Oudjidane says Byld is particular about those that are technical, committed and frugal. “I think founder-problem fit is also critical because we know how difficult it is to build a business and there’s a lot of second-order effects on the founder,” he adds.

The four-month-old venture capital firm doesn’t intend to invest in more than 15 to 20 portfolio companies in this first fund, said Oudjidane. According to him, Byld isn’t a “spray and pray shop” and will invest an average ticket size of $500,000 in startups while reserving around 50% of the fund for follow-on.

Byld Ventures has eyes for startups mainly across Egypt and Nigeria due to the partners’ experiences in those markets; however, it will also keep an eye on Ethiopia and Algeria — the latter being a biased choice citing Oudjidane’s roots. That said, on a personal note, Oudjidane is one of the few people on the continent juggling founder-investor roles simultaneously; in his case, a Sudan-based fintech and a U.K.-based fund. He says the somatic synergies between both duties afford him this privilege. “Bloom and Byld are personal to me. I believe in Africa’s potential and want to dedicate my life to ‘bylding.’ It is incumbent upon us [this generation] to spearhead change,” remarked the founding partner. Ships must slow down to save endangered whales, US gov’t says | Wildlife News