It’s safe to say that millions of Americans dream of becoming real estate investors but can’t or don’t due to a variety of challenges, including lack of accreditation, capital and time.

So it’s no surprise that in recent years, a flurry of startups have emerged that aim to give more people access to real estate ownership in the form of fractional shares.

One such startup, Landa, is emerging from stealth today with $33 million in funding – including a recent $25 million Series A round and an $8 million seed round. NFX, 83North and Viola co-led the Series A, which closed in the first quarter of this year, for the New York company. 83North and NFX co-led its seed round.

“Real estate ownership is the biggest source of wealth generation, and it’s out of reach for most Americans. As housing inequality grows, wealth inequality grows and property ownership remains inaccessible,” Cohen told TechCrunch in an interview. “So we were brainstorming on ways to lower the barrier to entry to real estate and provide more people with the ability to access the asset class.”

And so Landa was born.

Until late last year, the company was mainly “getting through the regulatory process,” Cohen said. So it only really started seeing significant growth this year. Specifically, Landa grew from 600 to nearly 25,000 investors using its app in 2022.

Those users have invested in about 400 properties in 7 cities – including Atlanta, New York City, Charlotte, N.C.,  Tampa, Birmingham, Orlando and Jacksonville, Fla. – using the Landa app.

The company’s goal with its latest capital is to scale and gain “more investors in more markets,” Cohen said. Landa over time has also secured $60 million in debt financing toward its market expansions.

The way it works is similar to other fractional real estate ownership startups and in particular, this model matches quite closely with that of Arrived – which allows people – including unaccredited investors – to invest in shares of rental properties “for as little as $100.” That startup raised $25 million in a Series A led by Forerunner Ventures and with participation from Bezos Expeditions, the personal investment company of Jeff Bezos. TechCrunch has previously reported on Fractional and Fintor, which are also focused on residential real estate.

In Landa’s case, the only requirements for investors are that they be above the age of 18 and U.S. residents. They can start investing with just $5, and buy and sell shares as well as see real-time updates on their properties from the Landa app.

But just how much money can one make with such a small investment?

“People start low and build their accounts over time,” Cohen said. “The $5 entry point, allows them to build confidence over time and increase their portfolio as they get comfortable.”

On the backend, he said, Landa purposely opted not to partner with REITS or funds with existing real estate operations.

“We built our own teams in the field doing maintenance, property management and building an app for residents,” Cohen added. “We also automated and using code for all those processes behind the scenes such as acquisition.”

Like Arrived, Landa creates an LLC to purchase the actual properties, which sell as little as $130,000 for single family homes and as much as just under $3 million for multifamily investments.

Landa makes money by taking a 6% acquisition fee at the time of purchase. It also keeps 8% of the gross rent on a monthly basis to cover property management fees. Since Landa itself is the property manager, it makes money on those fees as well.

“We focus on properties that produce good dividends and good rental income,” Cohen said. “We look for properties that are in ready to rent condition or require minor work, and where we have good confidence that we won’t have significant material expenses right after acquisition. We are focusing on cap rates and markets that can produce high occupancy rates and high income.”

Landa presently has 46 employees and its headquarters in New York. 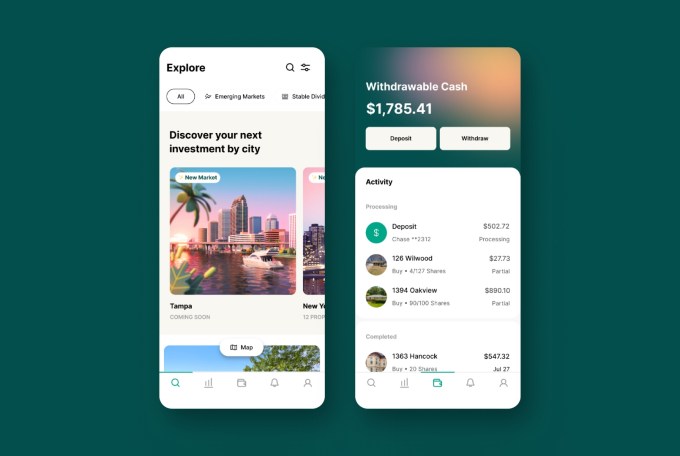 Gigi Levy-Weiss, founding partner at NFX, said she has known Cohen since he was 16 and founded his first company, Smartbus,  a B2B marketplace for bus companies that was acquired in 2016.

“When we reconnected to discuss Landa and how they’re going to increase accessibility to invest in the $43 trillion U.S. residential real estate market, I knew this was something we had to be a part of.,” she wrote via email. “Since then, Yishai and Landa have shown a remarkable ability to innovate almost every aspect of this market…”

Levy-Weiss added: “The combination of the low entry barrier with an innovative, mobile-first user experience is truly revolutionary compared to other real estate investment options which essentially serve the same audience that always had access.”

Interestingly, startups focused on rentals seem to be gaining more traction, and investor attention, than those focused on home buying.

“Buy before you sell” startup Reali began the process of shutting down last week after raising $100 million in venture funding just one year ago. Digital mortgage lender Better.com was reportedly planning its fourth layoff in 9 months as of last week. The two companies aren’t the only ones facing challenges in the real estate tech world, though. Earlier this month, another “buy before you sell” startup Homeward laid off 20% of its staff. And Redfin and Compass let go of a combined 900+ people in mid-June. In February, online brokerage Homie laid off about one-third of its staff, or some 90 to 100 people.

My weekly fintech newsletter, The Interchange, launched on May 1! Sign up here to get it in your inbox.