I have been carrying both of Samsung’s new foldables on my person when I leave the house for the last few days. It’s mostly for testing purposes, of course, but there’s also a fun game I like to play when I see people I know. I pull them both out, stick them in front of the person and see how they react.

This entirely unscientific approach has yielded results I’d say are roughly in line with the numbers the mobile giant threw out just ahead of the recent Unpacked event. “Last year, 70% of Galaxy foldable users turned to the Flip to help them see the world from a different point of view,” mobile head TM Roh noted in a blog post.

The sentiment, I think, was a surprise to Samsung. The company has previously positioned the Galaxy Z Fold as the flagship of its foldables play. And why not? It’s bigger, flashier, pricier and — perhaps most important of all — it was first. The device has been a kind of platonic representation of foldable phones. It is, likely, the form factor most imagine when thinking about foldables. That, after all, was the original promise: the ability to carry a tablet-sized screen around in your pocket. 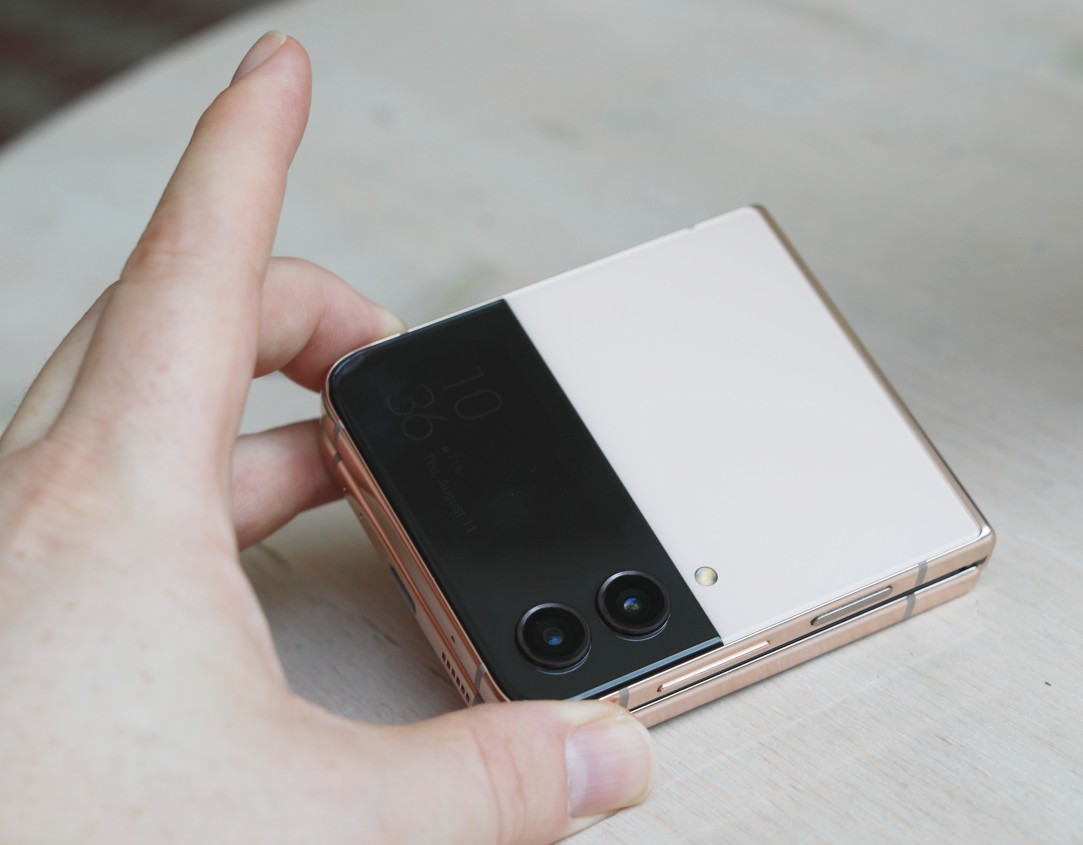 Unexpectedly, however, something still exists in our lizard brains that makes the flip form factor appealing. Maybe it’s the decades of clamshell dumbphones that is imprinted on us. Maybe it’s that satisfying snap. Equally likely is that we all have a kind of unaddressed big-phone fatigue. Screens and the phones that house them have gotten progressively larger over the past decade. It’s a counterintuitive trend in the electronics world — particularly for a device intended to be carried around on our person at all times.

The reason there’s a bit of surprise here is the folding functionality serves an altogether different purpose. The Galaxy Z Flip isn’t affording you the ability to carry around a tablet. Compared to the Fold’s 7.6-inch screen, the Flip is downright reasonable, at 6.7 inches in its full, unfolded glory. That’s the same as the iPhone Pro Max and just a smidge under the Galaxy S22 Ultra. It’s not a wildly large phone screen by 2020 standards.

But the ability to snap it shut, stuff it in your pocket and go is the sort of functionality that has broad appeal. It’s helped along by the fact that the Galaxy Z Flip is a nice object. It’s one that looks good and makes sense — one where, after the initial novelty wears off, it’s something with pragmatic purpose. In the earliest days of the phablet, we used to have a jeans test. Simply put: Will the device fit in your jean pockets. At a time when the body-to-screen ratio was far more unbalanced, the answer was “no” a surprising percentage of the time. 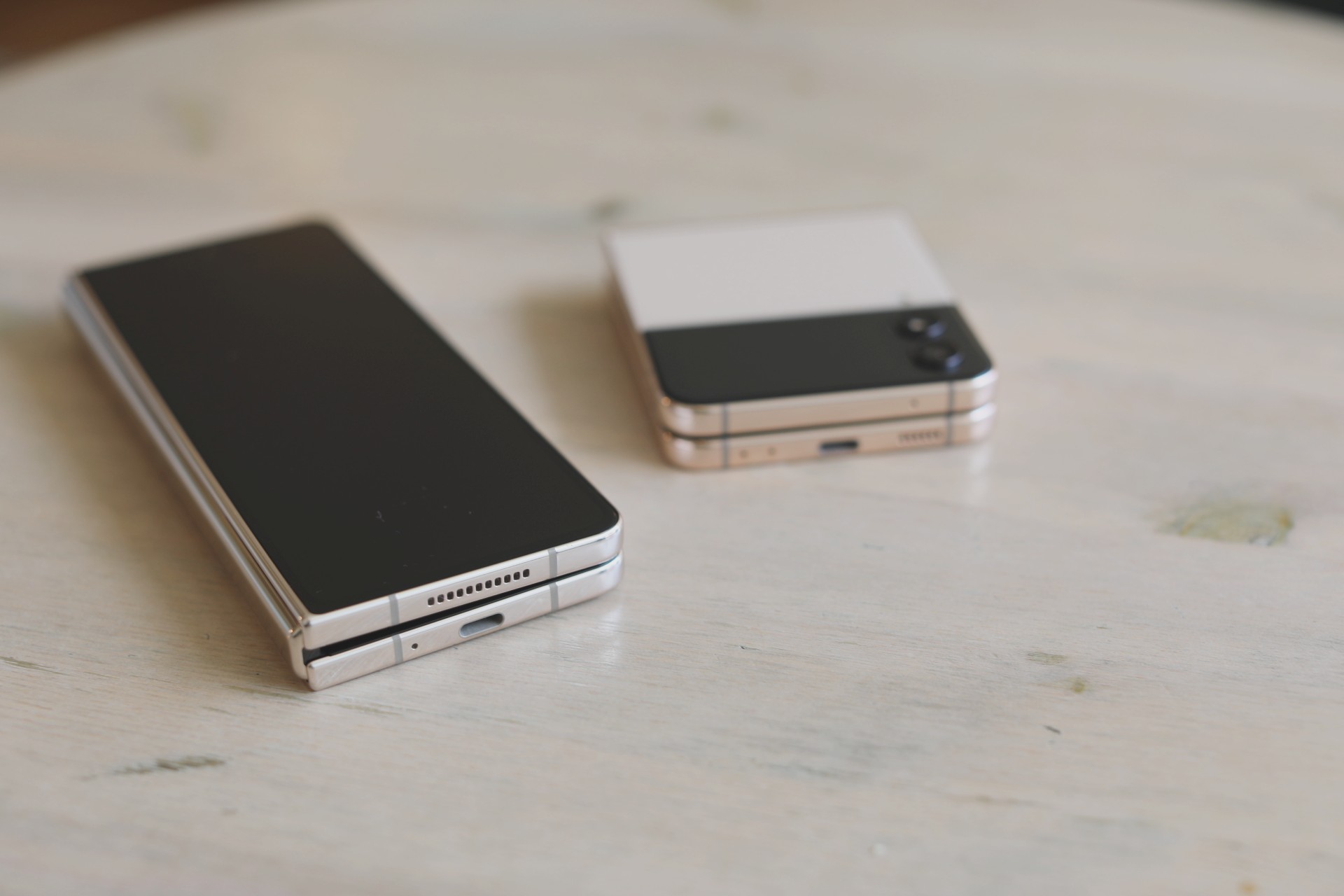 As screens have continued to creep up in size, thankfully, technology has afforded the ability to shrink the phones around them. It’s easy to see the foldable being the next step in that evolution. More and more, we’re paring down the contents of our pockets. Phones do a lot of the heavy lifting — serving as credit cards, identification and, increasingly, keys. For those of us who still carry around wallets (guilty), slim is the thing. Perhaps Samsung initially didn’t recognize that it was developing the antidote to the massive phone phenomenon it played the lead role in creating.

Releasing the two products alongside one another has offered some fascinating insight into what — if anything — consumers are looking for in a foldable. I will say, I think the tendency of the Flip over Fold is due, in part, to just how early these products are. In the first days, that meant the implicit understanding that there would be flaws. A couple generations later, it’s recognizing the refinements that need to be done.

It’s a breath of fresh air, really, for someone who has been covering this category for so long. I talk every so often about how most phones are pretty good now. The unintended consequence of pretty good is boring. Flagship smartphones are boring. That’s effectively the origin story of a company like Nothing. The industry has settled on a form factor and now any updates happen within fairly strict perimeters. What if, anything can be done to make consumers excited about phones again? 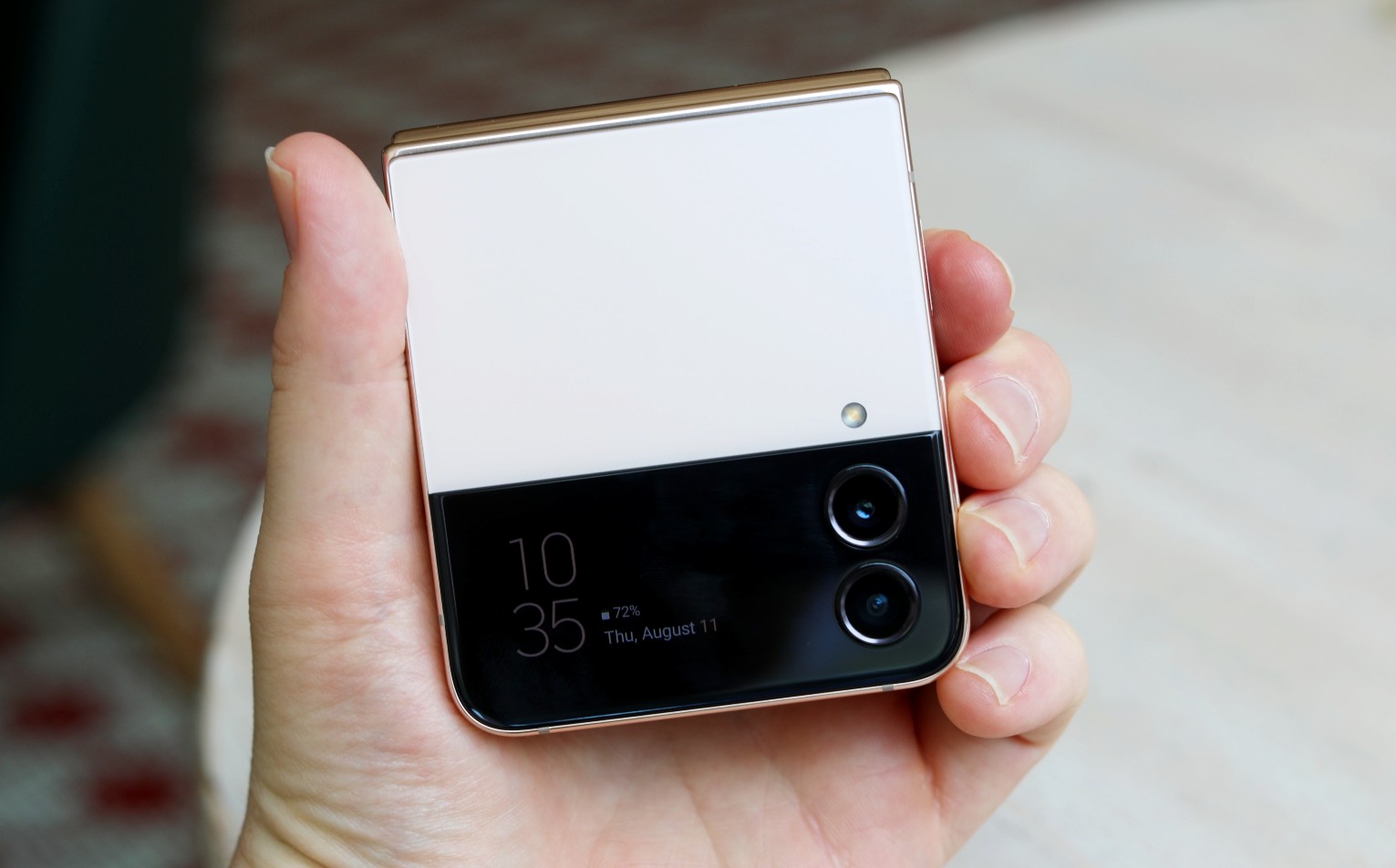 The foldable presents one such future. Aside from the obvious early complaints with the first Galaxy Fold, the two most immediate issues were 1) The front screen was extremely limited and 2) It’s big and heavy. The company has largely addressed the first point (I’ll save that for our Fold review), while the second continues to be an issue.

One of the primary selling points of foldable devices is their relative portability, and the device really presents a different way to be big and heavy. It’s easy to see future updates addressing the Fold’s relative heft, and, perhaps, public opinion shifting on the devices, but for now, the Flip has it beat, handily. It’s entirely too early to tell if the flip form factor is the future of foldables — but it seems safe to declare that it’s the future of now.

The device still struggles with a mostly useless front screen. It’s still 1.9 inches, with a 512 x 260 resolution. The hardware limitations are apparent at first glance. It’s almost exclusively good for notifications — weather, time, calendar alerts. You can add a handful of widgets, but it’s effectively a way to check info at a glance without opening the phone.

One of the more exciting things about the nascent form factor, however, is relying on third parties to envision clever uses for the design. The ability to use the screen as a preview for selfies, for instance, has been opened to developers like Meta, which is enabling the feature for Instagram, Facebook and WhatsApp, so you can put the fold on the desk in front of you, prop the top up and get a preview of yourself while shooting. 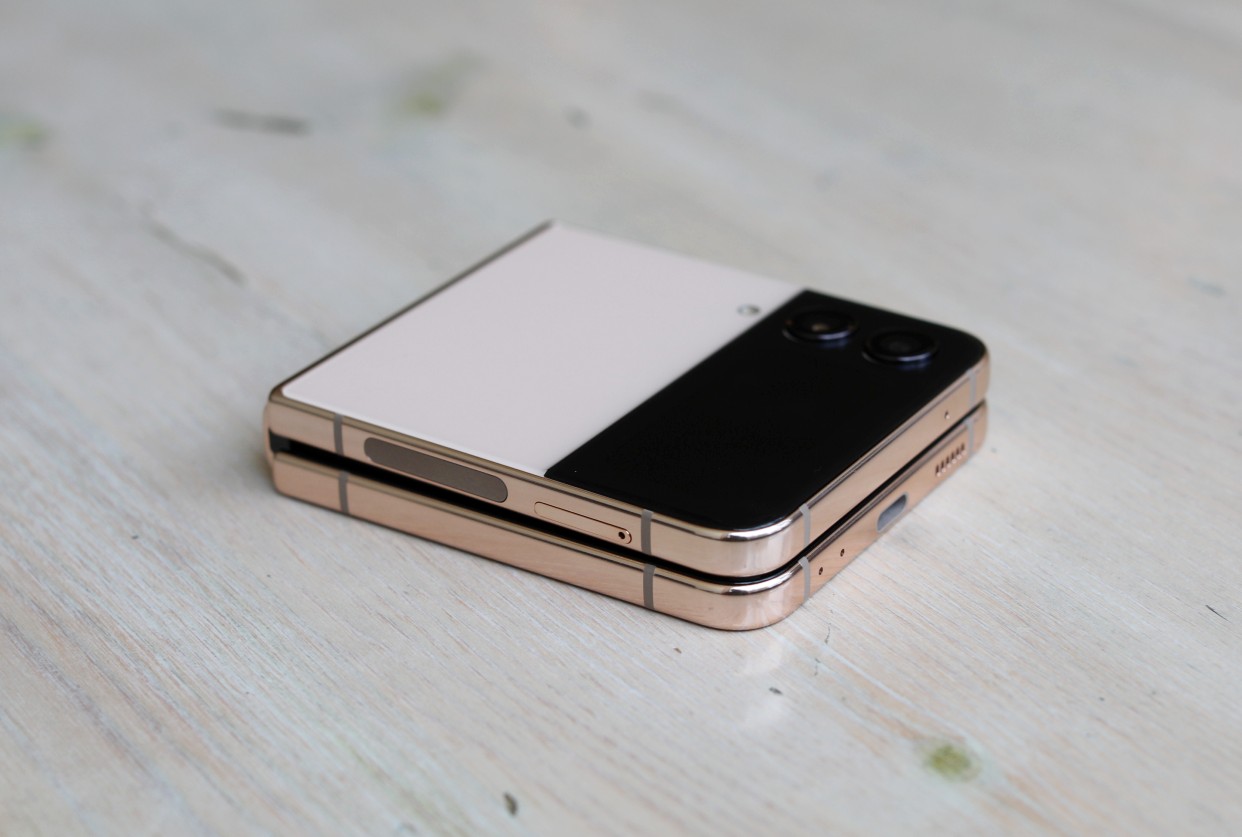 I dig the design language the company has settled on here, and the matte finish on the outward-facing glass feels good in-hand. Samsung’s also at the forefront of bespoke customizable hardware finishes, and the panels accommodate this quite well. I wouldn’t be entirely surprised to see the facing display continuing to monopolize more of the phone’s front in future iterations, but honestly, I think there’s a case to be made for the physical act closing to be slightly less connected for a few moments. Heck, it would be nice to have an option where notifications (sounds, vibration or muted) change based on whether the phone is opened or closed.

The same AMOLED display is on-board, here with a 120Hz refresh rate and a hole punch camera, up top. In fact, the external hardware is mostly similar to the Flip 3. I can’t say I blame Samsung — the Flip has mostly felt right from the outset. And, frankly, the company doesn’t have a ton of competition in this space pushing it to make major changes — though I’m certainly excited to see if Lenovo sticks the landing with the latest Motorola Razr. I like what I see so far.

The tweaks to the system are largely internal. Specifically, that means bumping last year’s Snapdragon 888 to the new 8+ Gen 1 (we’ve got to do something about that new naming convention). Along with a performance bump, the new silicon brings other advtantages, including improvements to camera performance and battery.

The battery itself has been bumped up from 3,300mAh to 3,700mAh. There are still some limitations on the battery front, given the fact that it effectively needs to be broken in half and separated by a hinge. Practically, that means there just isn’t as much room as in a comparably sized, non-foldable system. All told, it should get you through about a day’s use — more if you keep it folded shut more often.

The camera hardware is largely the same — a pair of rear-facing 12-megapixel lenses (main and ultra wide) and a front-facing 10-megapixel. The camera system is perfectly decent, even if the zoom is a bit lacking, but that’s a place the company will no doubt improve on in future iterations. You do get some improvements here, however, including a brighter sense and improved night mode, which will up your low-light shooting.

The other standout feature in the battle between Flip and Fold is pricing: $1,000 isn’t cheap, by any stretch, but we’ve slowly been trained to accept that figure for flagship devices. The $1,800 Fold, on the other hand, is not for the faint of heart.

As I noted in the initial preview, Samsung’s foldables have matured to the point where updates are more iterative. Given how dramatically the company leads the market, who can blame them, really? The Galaxy Flip continues to be the closest thing we have to a mainstream foldable, and right now, nothing else comes close. Robin Games debuts Playhouse, an interior design game you can both play and shop – TechCrunch