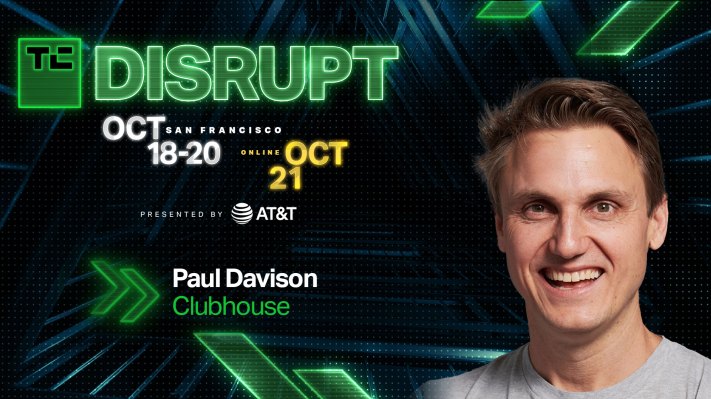 When social audio app Clubhouse launched in May of 2020 (with a $100 million valuation), it took off like a rocket ship fueled, in large part, by pandemic restrictions that made it difficult for people to gather and talk in person. By April 2021, it raised a Series C funding round (led by Andreessen Horowitz), earning a $4 billion valuation.

Fast-forward to 2022, and the company faces competition from the likes of Reddit Talk, Twitter Spaces, LinkedIn and Walkie-talkie. Clubhouse has been busy launching new features, a sign some experts see as an effort to retain its 3.5 million active users — a drop of more than 60% from its peak in 2021.

That’s a lot to unpack and there’s plenty more to discuss, which is why we’re thrilled that Paul Davison, Clubhouse co-founder and CEO, will join us for a Founder Fireside at TechCrunch Disrupt on October 18–20 in San Francisco.

TechCrunch will talk with Davison about a range of topics, including the company’s beginnings, recent layoffs — described as part of a broader restructuring — and how it will stay relevant in a post(ish)-pandemic world.

Prior to founding Clubhouse, Davison served as CEO after founding Highlight, a location-based social network acquired by Pinterest. He was entrepreneur-in-residence at Benchmark and worked on the early team at Metaweb, a graph search startup acquired by Google.

Davison holds a bachelor’s in industrial engineering from Stanford University and an MBA from Stanford’s Graduate School of Business, where he was an Arjay Miller Scholar.

TechCrunch Disrupt takes place on October 18–20 in San Francisco. Buy your pass now and save up to $1,100. Student, government and nonprofit passes are available for just $295. Prices increase September 16.

Is your company interested in sponsoring or exhibiting at TechCrunch Disrupt 2022? Contact our sponsorship sales team by filling out this form.