Beijing says US politician is ‘playing with fire’ as she visits Taiwan amid heightened US-China tensions.

China has condemned the visit by US House Speaker Nancy Pelosi to Taiwan as “extremely dangerous”, warning that the trip was a threat to stability in the region.

Pelosi arrived in Taiwan late on Tuesday on a trip she said demonstrates the United States’ solidarity with the self-governed island, which China claims as part of its own territory.

Washington does not recognise Taiwan as an independent state, but is bound by US law to provide the island with the means to defend itself.

The US politician explained her reasons for visiting Taiwan in an editorial published in the Washington Post minutes after she arrived on the island.

“We cannot stand by as the CCP (the Chinese Communist Party) proceeds to threaten Taiwan – and democracy itself,” she wrote in the opinion piece.

Pelosi – the highest-ranking US official to travel to Taiwan in 25 years – arrived at Songshan Airport in downtown Taipei on a flight from Malaysia to begin a visit that risks pushing US-Chinese relations to a new low.

Her delegation was greeted by Taiwan’s foreign minister, Joseph Wu, and Sandra Oudkirk, the top US representative in Taiwan. 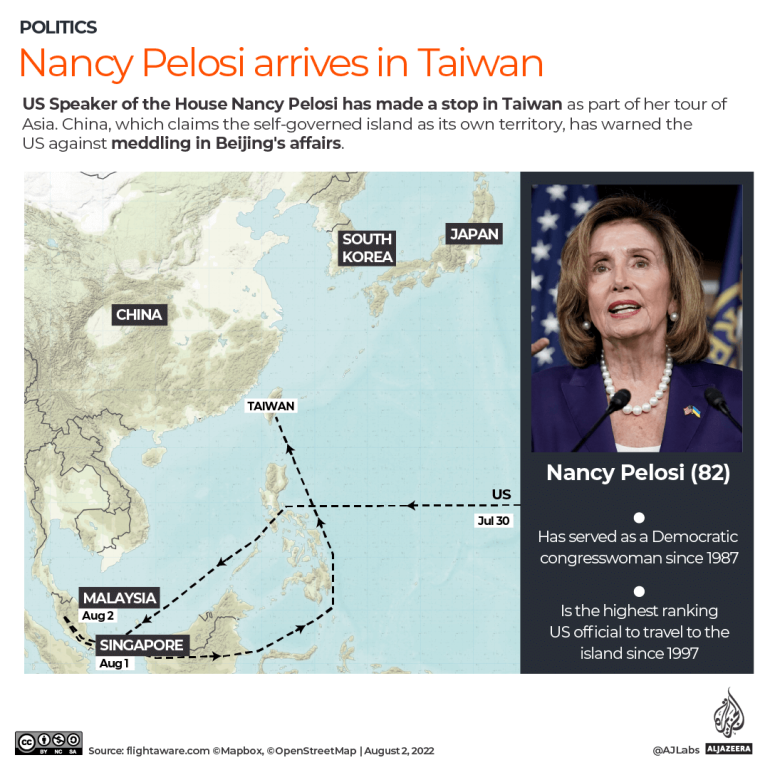 China immediately condemned Pelosi’s visit, with the foreign ministry saying it seriously damages peace and stability in the Taiwan Strait.

The visit “has a severe impact on the political foundation of China-U.S. relations, and seriously infringes upon China’s sovereignty and territorial integrity,” it said in a statement.

“These moves, like playing with fire, are extremely dangerous. Those who play with fire will perish by it,” the statement added.

Chinese warplanes buzzed the line dividing the Taiwan Strait before Pelosi’s arrival. The Chinese military has been put on high alert and will launch “targeted military operations” in response to her visit, the defence ministry said.

The People’s Liberation Army Eastern Theater Command announced that it will conduct joint air and sea drills near Taiwan starting on Tuesday night, and test launch conventional missiles in the sea east of Taiwan.

Pelosi is on a tour of Asia that includes announced visits to Singapore, Malaysia, South Korea and Japan. Her stop in Taiwan was unannounced but widely anticipated.

Our visit reiterates that America stands with Taiwan: a robust, vibrant democracy and our important partner in the Indo-Pacific. pic.twitter.com/2sSRJXN6ST

Pelosi said that the visit to Taiwan “in no way contradicts” one-China policy.

“By traveling to Taiwan, we honor our commitment to democracy: reaffirming that the freedoms of Taiwan – and all democracies – must be respected,” Pelosi wrote.

The trip is controversial as it risks triggering a major crisis between China and the US. China had threatened the US that there would be “serious consequences” if Pelosi went ahead with her visit.

Taiwan’s President Tsai Ing-wen will meet with Pelosi on Wednesday morning and then have lunch together, the presidential office said. Pelosi, travelling with six other American lawmakers, is the first US House speaker to visit Taiwan since 1997.

Pelosi underscored the significance of this trip by making connections between Taiwan and Ukraine, noting that “the world faces a choice between autocracy and democracy” and writing “As Russia wages its premeditated, illegal war against Ukraine, killing thousands of innocents – even children – it is essential that America and our allies make clear that we never give in to autocrats.”