Founded out of Romania initially as Deskover in 2005, UiPath is one of the preeminent RPA platforms, helping to automate repetitive software-based tasks at companies including Google, NASA, and DHL. After rebranding in 2015, UiPath moved its headquarters to New York City two years later. The company had raised around $2 billion and attained a valuation of $35 billion ahead of its arrival on the public markets in April, 2021, though its valuation has plummeted in the intervening months.

While RPA is distinct from AI insofar as the former typically adheres to a manual “rules-based” approach, RPA certainly jives with AI, and the two technologies can be used in conjunction with each other to automate all manner of repetitive tasks in the workforce.

UiPath already embraces artificial intelligences through AI Center, enabling its customers to incorporate AI and machine learning (ML) models into their automations — this includes pre-built models supplied by UiPath, such as extracting and classifying data from documents, emails, or images. But it also allows companies to bring their own ML models to the mix, or access third-party models provided by UiPath. 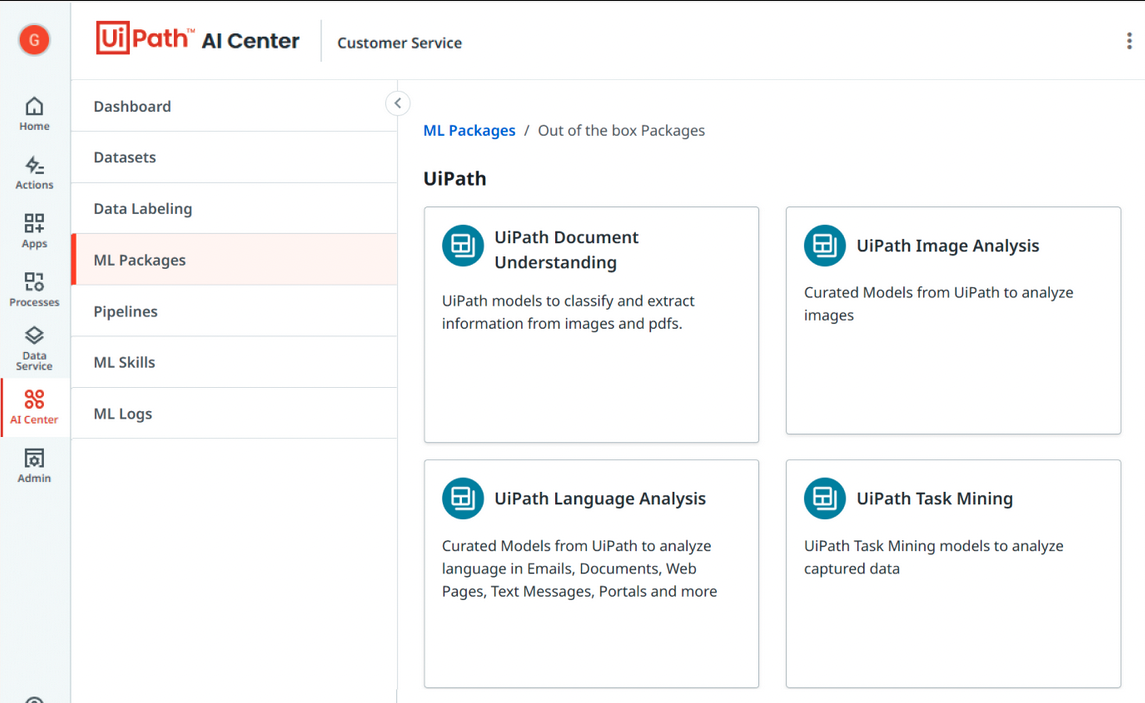 So UiPath is no stranger to AI, but by bringing Reinfer in-house, the company is going some way toward bolstering its native NLP capabilities. Reinfer specializes in transforming unstructured information from documents and communications into structured data. This data can then be analyzed and put to use as part of a company’s broader automated workflows.

The problem that Reinfer is setting out to solve is sizeable — unstructured data is said to constitute as much as 90% of all data generated by organizations, spanning anything from text and images, to server logs and customer support emails. Such data may hold deep insights, such as whether consumers are happy or unhappy with a company’s product, but unlocking such insights is traditionally a manual, labor-intensive process — and that is where NLP enters the fray, enabling companies to mine information at scale.

So rather than simply sending an automated response to an end-user’s email request, for example, UiPath and Reinfer combined may allow companies to send tailored responses based on the details of the initial message.

“Automation and AI are a powerful and natural pair that together empower the vision of the fully automated enterprise,” Ted Kummert, executive VP of productsand engineering at UiPath, said in a press release. “Our customers are awash in documents, communications, and data that they need to understand the meaning of and process efficiently. Combining Reinfer’s NLP technology with our Document Understanding and AI products expands the breadth of our current AI-powered automation capabilities and unlocks new automation opportunities for our customers.”

Reinfer was founded out of the U.K. in 2015, and it had raised a little more than $11 million in funding. In its seven year history, Reinfer has also amassed a fairly impressive roster of customers, including Deloitte, Natwest, UBS, Deutsche Bank, and Accenture, so this latest deal should open up a broader customer base to UiPath.

As a result of the acquisition, Reinfer’s features are already available to UiPath customers in private preview, with further integration plans scheduled to be announced later this year.