Fewer Americans applied for unemployment insurance for the first time in four weeks, but the number is still the highest since November, suggesting that the economy may be slowing down.

The four-week average for claims, which smooths out some of the week-to-week volatility, rose by 6,250 from the previous week, to 249,500. That number is also at its highest level since November of last year.

For the week ending July 16, there were 1,359,000 Americans receiving unemployment benefits, a decrease of 25,000 from the previous week. For months, that number has been close to 50-year lows.

The Department of Labor earlier this month announced that companies added 372,000 jobs in June, a surprise increase and a rate comparable to the preceding two months. Given the more general indicators of economic deterioration, economists had anticipated that job growth would decline significantly last month.

For the fourth consecutive month, the unemployment rate stayed at 3.6 percent, matching a low that had not been seen in nearly 50 years. 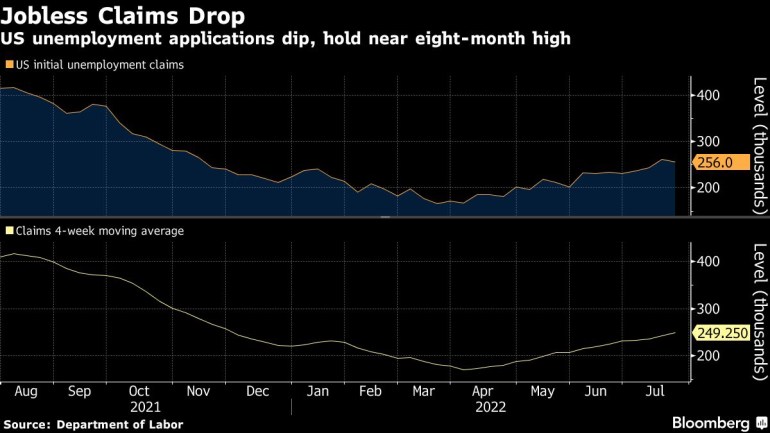 However, total demand for labour remains high. The US government earlier this month announced that firms posted fewer positions in May amid concerns that the economy was weakening. For every individual who is unemployed, there are currently almost two job vacancies.

And while the labour market appears robust, companies like Tesla, Netflix, Carvana, Redfin, Coinbase and Shopify have recently announced layoffs. Other firms have said they would slow hiring.

American shoppers’ sentiment has also taken a major hit in recent months. The Consumer Confidence Index fell for a third straight month to 95.7 from a downwardly revised 98.4 reading in June – the lowest reading since February 2021. Americans are being more cautious with their spending.

There are other indicators pointing to a persistent slowdown in the US economy. On Thursday, the Department of Commerce said that the US economy shrank 0.9 percent in the second quarter, the second-straight quarterly contraction. Two consecutive contractions in gross domestic product (GDP) have traditionally signalled that a recession is on the horizon.

“The Inflation Reduction Act will add another $370bn in clean energy tax credits in reconciliation, including incentives to accelerate domestic production of solar panels, wind turbines, batteries, and critical materials processing. That doesn’t sound like recession,” the president said.

Let me be clear.

The Inflation Reduction Act of 2022 would be the most significant legislation in history to tackle the climate crisis and to improve our energy security.

Despite Biden’s rosy outlook, consumer prices continued to soar, up 9.1 percent in June compared with a year earlier, the biggest yearly increase in four decades. On Wednesday, the Federal Reserve raised its interest rates by 75 basis points. The US central bank had previously raised rates by the same amount following its June meeting. In May, it increased borrowing costs by a half point.

The rate increases are having an effect on the economy as well. Higher mortgage rates have sent home sales tumbling after a boom during the coronavirus pandemic caused prices to reach record levels. Higher rates have also made the process of buying a new car more difficult and pushed credit card rates up.

Securities are in the eye of the beholder – TechCrunch For Biden, probe of classified documents is a political snag | Joe Biden News Can FTX’s bankruptcy bring order to its chaos? • TechCrunch