US consumer spending barely rose in June after falling in the prior month, underscoring how decades-high inflation has eroded Americans’ paychecks and tempered demand.

Purchases of goods and services, adjusted for changes in prices, increased 0.1% in June after a revised 0.3% drop a month earlier, Commerce Department data showed Friday. Spending on services and merchandise both crept higher.

The personal consumption expenditures price index, which the Federal Reserve uses for its inflation target, rose 1% from a month earlier and was up 6.8% since June 2021. The annual advance was the biggest in 40 years. 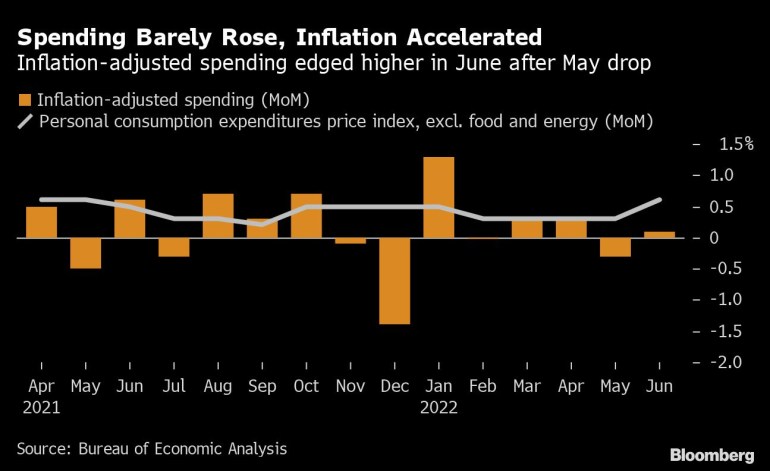 Excluding food and energy, the price index increased a larger-than-forecast 0.6%. That was the biggest gain in more than a year. The core measure was up 4.8% from a year ago, a slight acceleration from the previous month.

Stock futures moved higher after briefly paring gains on inflation concerns. Treasury yields were also up slightly along with the dollar.

The figures come just a day after separate data showed the economy shrank in back-to-back quarters and underscore how spending power has deteriorated in the face of surging prices. Americans’ incomes, while growing, are still not keeping pace with rapid price increases, and that’s left many consumers with little — if any — leftover cash to spend after paying for necessities like gas, food and rent.

The Fed is determined to bring down inflation, and fears are mounting on whether the central bank’s actions, which have already slowed home sales, will tip the economy into a recession.

While inflation-adjusted outlays for services rose 0.1%, the gain was the smallest this year. Spending on merchandise posted a similar advance but it followed a 1.6% slump in the prior month.

Unadjusted for inflation, spending rose 1.1% from the prior month, while personal income increased 0.6% for a second month.

Businesses have already noticed changes in consumer behavior as inflation erodes workers’ discretionary incomes. McDonald’s Corp. says it’s seeing customers trade down to its value offerings, and Walmart Inc. says receipts are tilted more toward food and away from general merchandise like apparel.

And while the labor market so far continues to add jobs at a healthy pace, a slew of tech companies have announced layoffs or plans to slow hiring. Any significant broadening in such behavior across sectors would add to concerns of an imminent downturn and help shape monetary policy in the coming months.

Earlier this week, the Fed raised interest rates by another 75 basis points and policy makers said they anticipate “ongoing increases” will be appropriate. Though how much depends on how the economy performs, said Fed Chair Jerome Powell.

“Restoring price stability is just something that we have to do,” Powell said during a press conference Wednesday.

The consumer price index, which typically runs hotter than the PCE price index, jumped to a fresh 40-year high of 9.1% in June. Earlier this week, Powell said the PCE gauge is a better measure of inflation.

Wages and salaries increased 0.5% in June. When adjusted for inflation, however, disposable personal income dropped 0.3%, the most in three months.

–With assistance from Kristy Scheuble. Photos: The life of Argentina’s Eva Peron | In Pictures News Ameri-coup: A brief history of US misdeeds | Opinions