Qwili, a startup that provides a hybrid sales product to micro and small merchants in South Africa, has raised $1.2 million in seed funding a year after closing an undisclosed pre-seed round.

E4E Africa, a South African venture capital firm, led the round, which welcomed participation from other firms such as Strat-Tech, Next Chymia, Untapped Global and Codec Ventures and angels like Ashwin Ravichandran and Kanyi Maqubela.

In a statement shared with TechCrunch, Qwili said it would use the investment for app development, new hires (improvement in operations and development capabilities) and hardware production.

The company’s hardware is a low-cost NFC-enabled smartphone called Qwili Pula that allows merchants to send and receive payments. The platform’s software (which can be downloadable as an app on any smartphone or automatically installed on Qwili’s phones) turns these smartphones into point-of-sale devices permitting merchants to sell value-added services such as data and pay-TV subscriptions, groceries and clothing to their customers. CEO Luyolo Sijake told TechCrunch on a call that Qwili’s phones cost between $60 and $70.

Qwili says its target audience are digitally excluded and unbanked customers. Its mobile app serves as a “digital sales portal” through which micro and small merchants (agents) can facilitate the sale of goods and value-added services, the company said in a statement.

At first, Sijake and his co-founders Thandwefika Radebe and Tapfuma Masunzambwa launched Qwili as a different idea. They employed a business-to-customer model where Qwili sold these devices to individual users who used the platform’s digital wallet to buy value-added services. The plan was as users operated the phone and Qwili took a piece of every transaction, the phone would eventually commercialize itself, and users could buy them off Qwili. It turns out that didn’t work, hence the pivot to merchants.

“During those early stages, the phone wasn’t paying back quickly enough, and there wasn’t high enough adoption of the digital services. But what happened was that people started using the digital wallet to sell pay TV, electricity and other value-added services to people around them,” said the chief executive. “They started using the phone in a way we hadn’t intended, making more sense commercially. That’s how we ended up with this agent model: essentially people using the device and the software to sell to others instead of buying services for themselves.” 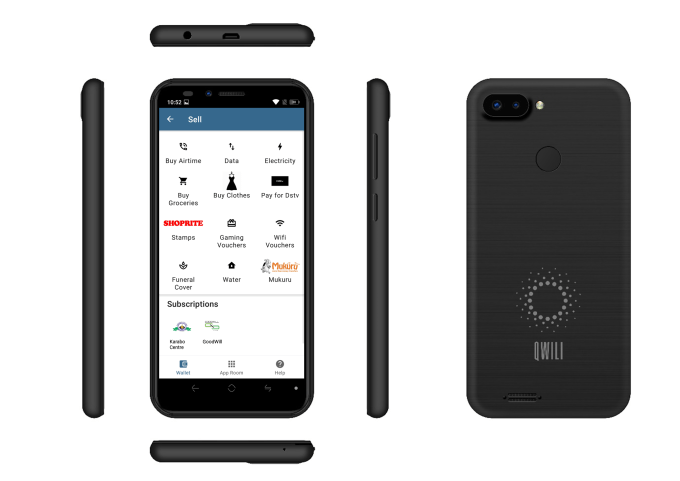 Qwili sold over a thousand smartphones to end users before the pivot. Its business-to-business model has picked up steam, too, as 500 micro and small merchants use the hybrid platform (about half use Qwili’s NFC-enabled smartphones). Its typical business customer is a seller without a storefront that sells digital products to immediate communities and networks informally. Buying a point-of-sale device with limited functionality doesn’t make economic sense for this category; in contrast, a smartphone where they can collect payments and advertise products over WhatsApp suffices.

Sijake said Qwili doesn’t profit from selling smartphones, as it is just an enabler to the company to impact merchants that use the platform for commercial purposes. It takes a commission on every sale made on its application. “We’re all about enabling people who are currently digitally excluded, to participate in the various forms of value that being digitally included has to offer,” he said. “So the real barrier to that has been hardware: a reliable quality smartphone being too expensive, which means access to the mobile internet being too expensive. So we hope to continue making smartphones available at below cost.”

Qwili, in a statement, says its impact is felt in three areas: first, agents on the platform have access to an alternative, flexible source of income through the commission they earn on sales made through Qwili. Second, customers of these agents see time, efficiency and financial barriers between them and the services they need significantly minimized. And third, the providers of value-added services have facilitated access to a previously offline market. Qwili says the funding allows it to increase the pace at which it scales its operation toward seeing its effect in all three of these areas grow.

According to Sijake, Qwili currently processes $75,000 monthly GMV from its 500 merchants. However, the South African platform — which saw strong turnover growth of over 300% from Q1 to Q2 of 2022 — plans to get those numbers up to $1 million from 3,000 merchants by the end of the year after it expands into neighboring Botswana.

“We believe that Qwili is both highly scalable and high impact. Qwili agents love the entrepreneurial opportunity that Qwili provides them while giving their community access to e-commerce and to fairly priced goods and services,” says Bastiaan Hochstenbach, co-founder and managing partner at E4E Africa on the investment. “Qwili’s founding team is exceptional, and the business model is a strong fit with E4E Africa’s aspiration to support diverse founders in creating a thriving, innovative, and inclusive Africa.”

Who is Viktor Bout, the man at centre of US prisoner ‘swap’? | Russia-Ukraine war News