It’s easy to be skeptical of the big social media giants — they typically sell user data to advertisers and have been mired in controversy for their approach to content moderation. Web3 proponents think they can build a new system altogether that sidesteps the concentrated power of platforms — a decentralized social media (DeSo) ecosytem where users ideally have more ownership over the content they create.

DSCVR, a blockchain-based social network built on Dfinity’s Internet Computer protocol, has entered the race to build a scalable DeSo platform with $9 million in seed funding led by Polychain Capital. Other participants in the round include Upfront Ventures, Tomahawk VC, Fyrfly Venture Partners, Shima Capital and Bertelsmann Digital Media Investments (BDMI), according to the company.

It’s a competitive space with plenty of startups and large companies racing to build a network that provides utility for its users. Earlier this month, ex-Coinbase employee Dan Romero secured $30 million led by a16z to develop Farcaster, a DeSo protocol that allows users to move their social identity across different apps. TechCrunch covered another seed-stage startup, Primitives, that raised a $4 million round in May for its own Solana-based DeSo network. And Big Tech is in the game, too — Twitter funds an offshoot of its service called BlueSky, an open-source DeSo project founded in 2019 that hasn’t gone live but is experimenting publicly with its development process.

DSCVR, for its part, hosts token-gated communities called “portals,” where users have to own a certain NFT to be able to participate. The communities help NFT projects build hype by airdropping digital assets to DSCVR users, cofounder and CEO Rick Porter told TechCrunch in an interview. 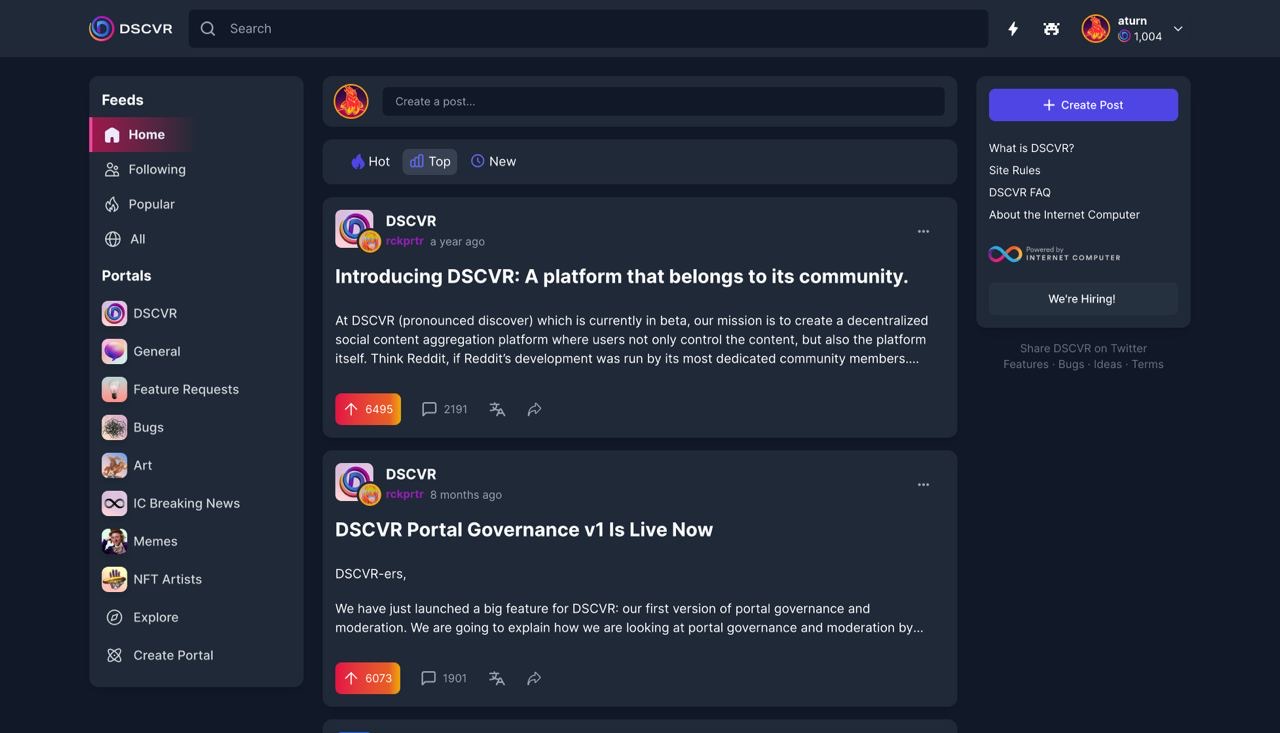 An image of the home feed on DSCVR Image Credits: DSCVR

“People need distribution for their NFTs. They want to achieve liquidity for their NFTs, and they need real people, not bots, to own these NFTs and to potentially hold on to them ourselves. So we become a distribution channel for NFTs so that [people seeking distribution] have a 10,000 entity collection and they might drop 1,000 to our top users,” Porter said.

DSCVR has onboarded over 100,000 users, according to Porter, and has generated “millions of dollars” in NFT rewards for those users through the airdrop reward mechanism. What sets it apart from other DeSo platforms, Porter said, is in its goal to build a bridge between web2 and web3.

“How do we take a typical web2 user who may not be comfortable with web3, and introduce them to web3 technology and give them that absolutely authentic and truly native experience within web3 without making major sacrifices to bridge that gap? That’s one of the differences that we’re looking at, is we are trying to increase the amount of perspective or increase the amount of fidelity that may be given out of a web3 experience,” Porter said.

To that end, Porter noted, linking an external wallet through MetaMask or another provider to a social profile can be complicated, particularly for those less familiar with web3 technology. DSCVR’s answer lies in its native wallet, which Porter says is available to users on the platform and does not require them to hand over control of their own keys.

The question DSCVR is trying to answer, he added, is how to give users a web3 native, decentralized experience with “little to no sacrifice.” It’s interesting that the company chose to build on the Internet Computer protocol rather than Ethereum, the most popular smart-contract chain. Porter said he made that decision after meeting Dfinity’s president and chief scientist, Dominic Williams, while Porter was working on a blockchain-based smart contract project as a consultant at BCG.

After becoming involved with Dfinity as the protocol itself was being developed, Porter decided after a few years to leave his role at BCG and begin working full-time with Dfinity. His first project was to build a message board on the protocol, which he said exposed him to the need for web3 communities and inspired his decision to build a social network.

The Internet Computer ecosystem has seen its own controversies, too. Dfinity is facing a class-action lawsuit claiming it illegally sold its tokens as unregistered securities. The lawsuit also named Polychain and a16z as defendants as both were early backers of Dfinity. Last month, Dfinity found itself the other side of the equation when it filed a lawsuit against two New York Times Reporters, Andrew Ross Sorkin and Ephrat Livni, alleging they engaged in defamation against Dfinity.

When asked why Porter thought the Internet Computer was the best choice to build his social platform, he said: “It feels like I’m developing on something like AWS, but it’s completely decentralized, right? I have upgradable smart contracts, so I can actually make changes and progressively upgrade my application, while still having everything verified and on-chain, and traceable.”

Still, communicating directly with customers is a necessity when building a DeSo platform, Porter said.

“The hard part is in web3, you don’t get a lot of analytics on about the user. You’ve got to really communicate with your user base to truly understand, what are the problems they’re facing? And what are the friction points? If some of the users face a problem, there’s no alert that we get,” Porter said. “We’ve got to hope that either they post on our site, or they have a friend post on our site to inform us of the problems that they’re facing, and then we can typically jump on and resolve it.”